There is knitting, and I made it in probably an evening’s worth of time, mainly last week, and most of it on the Friday night. A friend at work asked if I could make her a beret, and bought some massively chunky yarn for it (about 2.5 sts per inch), so I ended up working out a stitch count based on another hat’s size, then just making it up as I went along. It is just a couple of rows of ribbing, some increasing to make a lip, and some decreasing to make the rest of the hat. The decreasing is a bit wonky on one side, but it should ease out with wearing and washing. It is also rather teacosy-ish 🙂 and probably a bit baggy on the rib as the chunky yarn, the fibre and the rib don’t seem to go together. And it has a bit of a nipple at the top :D. I’m going to offer to reknit it if it isn’t suitable, particularly given that it didn’t take very long once I’d got going, but if it is ok, fine by me!
I’ve decided to re-evaluate my knitting basket too. I think I ought to frog one or two things, finish off the good stuff (like the colour work socks), but mainly concentrate again on the knits I owe people. Luckily these people are very very nice and understanding 🙂 The little sock swap I’m participating in needs some socks, so I’m not going to start any other socks until those are done. I don’t want to overload my tiny brain with projects right now.
Oh, and Laila’s socks are finished 😀 Apologies for the poor photo quality – it has done nothing but rain and snow this weekend 🙁 I had to use the flash at 2pm :S I started them in October and finished them last weekend eeeeeeeeeee! I’m so happy with them! I messed up the pattern a bit, which you luckily wouldn’t know by looking, plus I made the first one a bit short so I added 3 more rows before the toe decreases and they were fine 😀 Still not a massive fan of Opal Uni, but it does well as a work horse yarn, and did the job very well for these. The pattern is pretty easy for a stranded sock, but I don’t know if the edition I borrowed from work is an older one or not, as the instructions and what the chart says don’t quite match (hence the mistakes cos I just followed the chart). I did one less repeat on the leg, and I’m left with 56g of the brown and 70-odd g of the pink, so plenty left over for more stranded knitting 😀 Probably the tangled garden pattern on Knitty…
In other news, life is improving now the virus is sneaking out the back door. Stick with me on this one – there is something quite cool at the end…
Last Saturday was the first time I’ve felt well outside of work, so DB and I took a walk in the woods with a camera, and headed up to the local farm shop for some tasty treats. It was the perfect winter day – crisp and cold (we soon warmed up climbing up the hill in the mud through the woods though), yet beautifully sunny with blue sky all over the place. This is in contrast to the ‘showers’ we had late last night, with thunder and lightening right above the house and frightening the cat. DB took some amazing photos I just have to share, but you can easily see why it felt like the first really wonderful day I’ve had in a long time. He took loads more than this, but these are my faves. 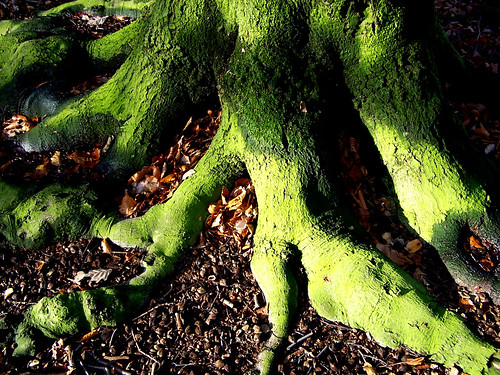 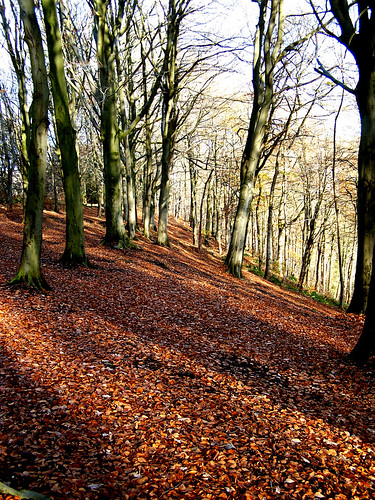 I should point out too that I went back to work last week too. It was really really tough. The first few days I felt like I might collapse at some point, but I managed and by the end of the week I felt almost normal, apart from a need to do strange arm exercises that look like I’m waving at someone. Now perhaps I should have gone back to the doctors earlier and asked for another week of sick leave, but really, I felt the need to get back on my feet and get going again. And also I didn’t really want to miss the chance to do this: 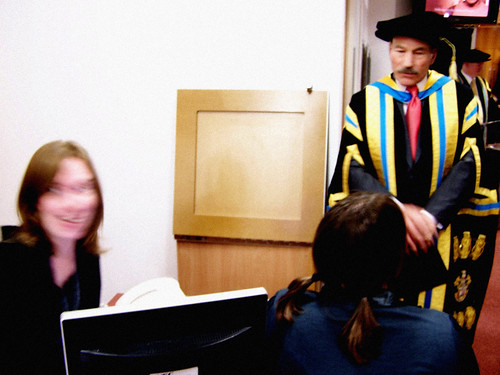 That’s me with the hair in bunches, sat next to my blurry line manager in the subject office (blurry because she couldn’t quite believe that certain gentleman had come to chat with us proles :D). And for those people who don’t recognise him with that small furry mammal on his upper lip and the university regalia, the gentleman chatting to me is Patrick Stewart 😀 He’d come to officially open the newly refurbished library/student centre, and I was lucky enough to be in the right place at the right time 😀 I missed him going in to the part where I work to shake hands with everyone thanks to having to, you know, do work and stuff :/ but this was totally worth missing the hand shaking 😀
You see – Pat and me, like that we are now [crosses fingers to demonstrate closeness].
Heeeheee!

10 thoughts on “Nothing spectacular. Well, actually that depends…”